When I was a freshman in college I took a Chicano Latino course that focused on the history of Mexican Americans in California, one of the lectures heavily discussed  the Zoot Suit Riots and the Sleepy Lagoon murder case.

PBS does a great job in talking  about what happened on that day of Aug 1, 1942 in Sleepy Lagoon,


The night of August 1, 1942, began with romance and ended in death. In the early evening several young couples from Los Angeles' 38th sarrived at the Sleepy Lagoon to spend some time together. Among the couples were Hank Leyvas and Dora Barrios. Hank was one of the oldest boys that spent time on 38th Street, and was feared and respected by many. Dora was his girlfriend. As they sat in their car, under the light of a waning full moon, they were suddenly and viciously attacked by a group of boys from a rival neighborhood. Hank and Dora were beaten mercilessly.
Later that night an injured Hank returned to 38th Street and gathered reinforcements. Finding people to accompany him was not difficult. Hank was immensely popular and the boys they were going after had violated an unwritten rule by beating Hank's girlfriend Dora. Close to thirty young people -- boys and girls -- piled into cars and headed for the Sleepy Lagoon.

That same night José Díaz, born in Mexico but raised in the United States, had decided to attend a birthday party on the Williams ranch where he and other immigrant families worked and lived. José had reason to join the party: in just a few short days he would report for induction into the Army and head for boot camp. The traditional fiesta was lively -- with food, music, dance and plenty to drink.

The spot where Hank Leyvas had been beaten earlier that evening was deserted, but he and his friends could hear the sounds of the birthday party at the Williams ranch. Convinced that the boys who assaulted him were there, Hank and the others converged on the small house. The fighting was brutal. Men and women, boys and girls struggled for about ten minutes. The fight had all the markings of an Los Angeles teenage rumble, except for what neighbors discovered shortly after the fighting. Lying in the shadows was José Díaz. He had been beaten and stabbed. He died later that night at Los Angeles General Hospital. 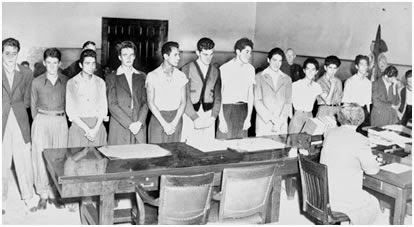 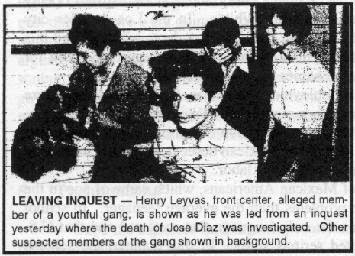 Los Angeles used this murder as a call to action. The Los Angeles Police Department basically profiled Mexican Americans  and arrested nearly 600 youth.  Nearly 40 youth who were connected or simply lived on 38th street were arrested and charged for the murder of Jose Dias. The 38th Street kids were pachucos, young men who dressed in baggy pants pegged at the ankles, and used slang words.

22 members were convicted for the murder of Jose Dias and this led to the Zoot Suit Riots. The riots were between military service white men and Mexican Americans fighting for the rights of these 22 kids.

The Zoot Riots were ignited because the 38th street boys did not get a fair trial. First of all jury members were able to read the newspaper and saw all of the negative press that was given to the boys. These boys were all told to dress the same way to be seen as gang members for the jury.  The did not receive proper counsel and had a biased judge.

Their convictions were overturned a year later and were release from prison including Henry Leyvas due to a court appeal that rule that there were numerous errors. 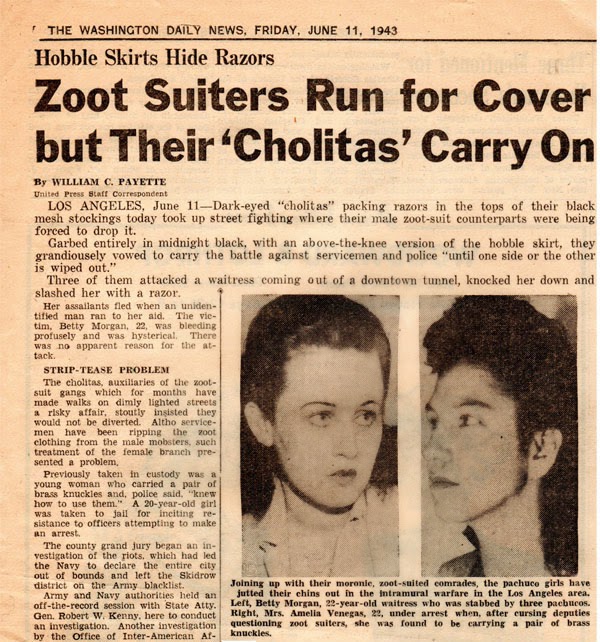 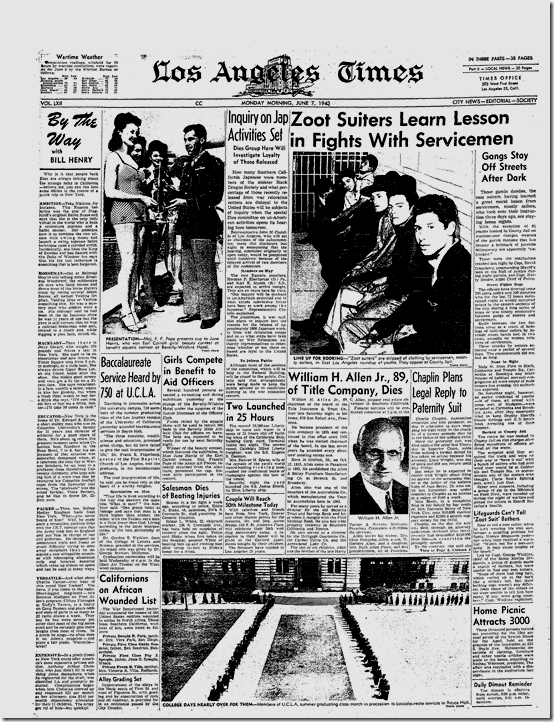 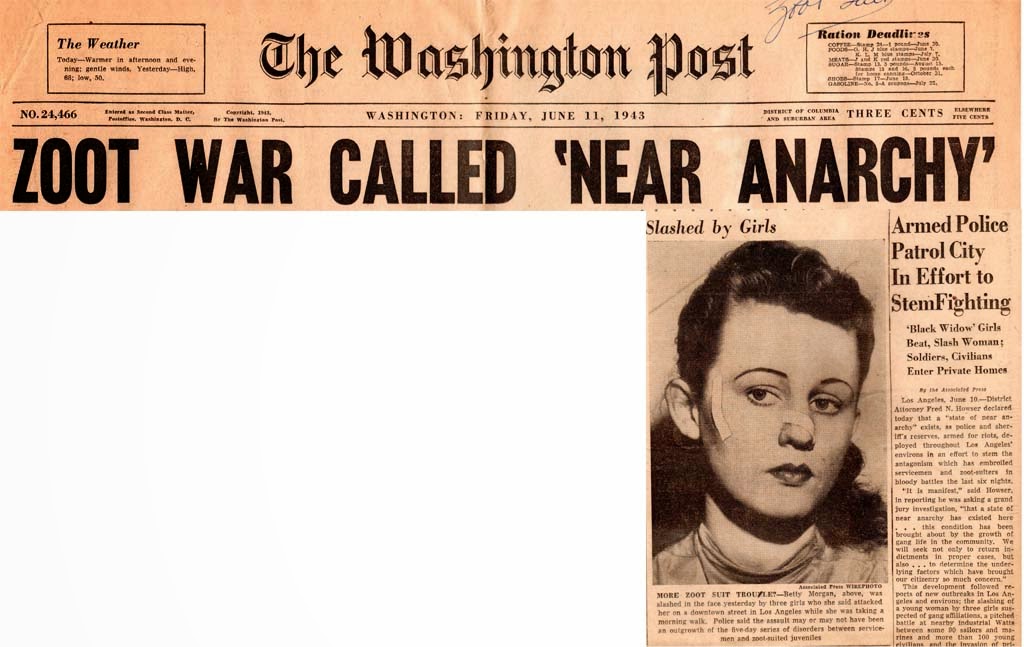 The location of the sleep lagoon murder is considered a mystery. If you use Wikipedia they name Commerce as the location of the murder, if you use other sites they might mention Bell or Maywood, and old newspaper articles that go back to that day just say it was located in a reservoir of water in Los Angeles. 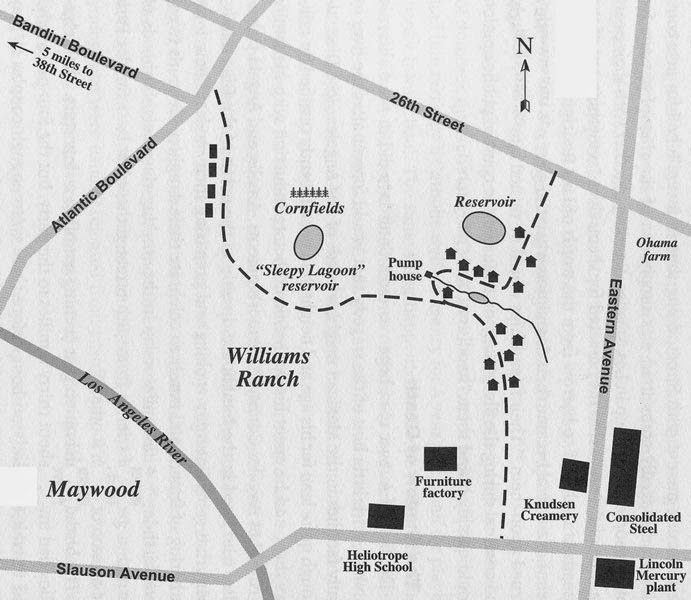 This map which was provided in an  acclaimed book "Murder at the Sleepy Lagoon: Zoot Suits, Race, and Riot in Wartime L.A." by Eduardo Obregón Pagán gives you an idea of where the place was located, after looking at this map I was able to outline and pencil in my idea of where the lagoon was located. 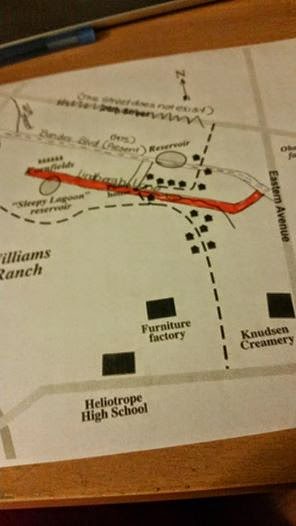 So here are the things to consider in the present day. 28th street is no longer on the map, it actually curves and ends at Bandini then it starts again in the Montebello/Commerce area. In the 1940's Bandini Blvd would end in Atlantic, it was not until the 70's when Bandini Blvd was expanded past Eastern Ave. There are now tiny streets on that section that lead to factories and companies. The street to consider in Lindbergh Lane which is a small street that runs parallel to Bandini. By looking at both maps William Ranch (the site of the murder) was located on now Bandini Blvd.

If you drive down Bandini  today from Atlantic to Eastern you are driving on top of the old ranch. You are literally driving over the old cornfield, the spot where that party was held, and the spot where Jose Diaz was murdered.

Newspaper always mention the accident as being part of Los Angeles, by that time the City of Bell and Maywood had been incorporated cities so newspapers would of mentioned those respective cities if the event happened there.

Conclusion
No one ever was charged with the murder of Jose Dias, despite Henry Leyvas being responsible for the attacks. The party that the 38th street boys were looking for were the Downey Boys which had left the party before 38th street got there. Hidden mysteries still remain like who really attacked the Henry Leyvas, who really stabbed Jose Dias?, but one thing for sure we know is the location of the accident. The sleepy lagoon was indeed in now present day City of Commerce.
Posted by Unknown at 12:54 PM