Who Knew #6 City of Commerce Could Have Been Downey

As I was going through old LA Times articles in the late 50's I came across something I had not heard before about the City of Commerce.

In the 1950s, Commerce’s booming industry and its central location in Los Angeles County proved attractive to neighboring cities casting about for ways to increase their tax-bases. Downey was one of the more aggressive cities attempting to grab a piece of Commerce. Area residents were also seeking some form of home rule at the time, whether it was by incorporating and setting up their own self-governing city, or by getting themselves annexed to a neighboring city willing to provide local services.

Downey’s annexation plan did not include services to the residents of Commerce neighborhoods, made up of Rosewood Park and Bandini at the time. Downey officials planned on annexing only the southeast industrial area of Commerce.

If Downey would have agreed to include services like those residents wanted who knows I would probably be living there. 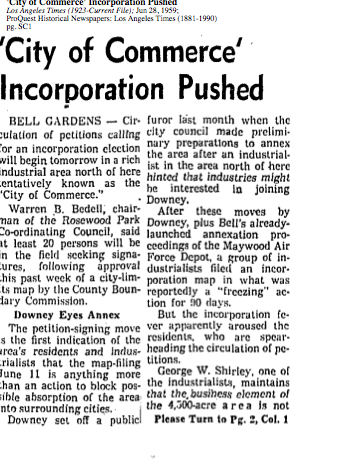