So after posting and writing about Vail Field a few months ago, I came across  people who told me about a possible  airfield on Atlantic and Telegraph in the City of Commerce. As I was doing research on the Alhambra Airport I found a few maps that clearly label this small airfield. It was hard to find much information but hope you enjoy a few things I dug up.

Little research that I found, it was called Ace Field in the 1920's, then renamed Sprott Field in 1931. One of the other many names and most popular one was Telegraph-Atlantic Airfield

According to Aero Files , the location of the airport was on Telegraph Rd, West of Atlantic, South of Telegraph. Right around the Bristow Park area. Perhaps in the 5 freeway area now.

I came across an LA Times article from 1932, about a very well known Southern California pilot who died in an accident after flying from Sprott Airport

The following picture  captures another airplane wreckage in the Sprott Airport. This picture courtesy of the UCLA library.

I could not find any information of when the airfield was ceased, with the emergence of Vail Field, I personally think it did not last much. No pictures of the airfield were found or any other mentions in the Los Angeles Times database. The last map I found was a 1939 map that also points out the airport as Telegraph Atlantic Airport. 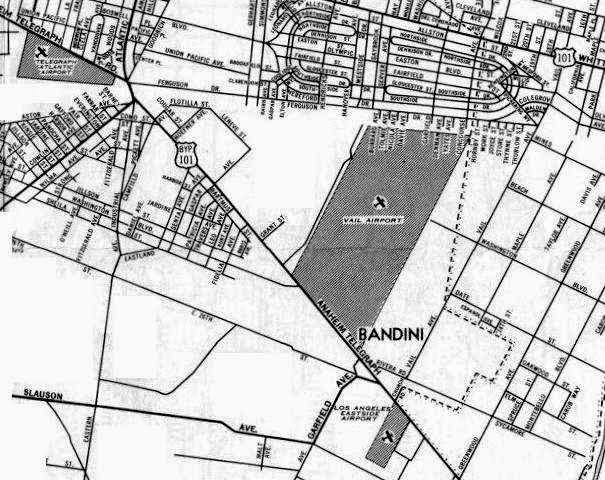 If you have any further details or information, feel free to share your knowledge.
Posted by Unknown at 10:27 PM