Who Knew #13 The Origins of Black Friday

Today as I opened a yahoo browser to go over my old email, I realized there was a countdown clock in black bold letters just like this.  In bold black letters I was being informed the countdown of the days before black Friday.  So I wondered, what's the history behind this day and who coined the term black Friday.


So after a few hours (not really a few minutes) of researching a who knew moment post came to mind. I am not running out ideas, I am serious, I just thought, it was really a who knew type of thing...

The term “Black Friday” was coined in the 1960's to mark the kickoff to the Christmas shopping season. “Black” refers to stores moving from the “red” to the “black,” back when accounting records were kept by hand, and red ink indicated a loss, and black a profit. Ever since the start of the modern Macy's Thanksgiving Day Parade in 1924, the Friday after Thanksgiving has been known as the unofficial start to a holiday season.

In the 1960's, police in Philadelphia  complained about the congested streets, clogged with motorists and pedestrians, calling it “Black Friday.” This was due to the traditional Army vs. Navy football game and a busy shopping mall with deals that people could not resist. 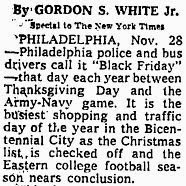 The term took off in a big way, but not for the reasons the cops hoped. By the 1980's the idea of black Friday became a national phenomenon and a great marketing strategy

So there you go the origin to the term Black Friday  came in the 1960's, and the really good deals started since the establishment of the Macy's Thanksgiving Parade. 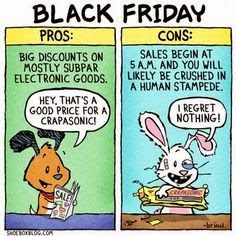