Just yesterday when I was looking into air raid sirens in Los Angeles. I came across an interesting article about a moment when panic landed in the streets of Los Angeles.

In the early  morning hours of February 25, 1942, residents of Los Angeles  were waken up by loud screaming air raid sirens and thundering anti-aircraft gunfire. Thousands of residents, ignoring blackout invasion rules, (Rules that were set right after Pear Harbor) left their beds and went into the streets to watch sweeping searchlights and orange tracer shells streaming into the night sky.

Trained volunteer air wardens grabbed helmets and boots to rush into action. Frightened drivers, speeding through darkened streets, collided with one another, resulting in traffic fatalities. Gunners expended more than 1,400 rounds of ammunition that caused quite a bit of damage to structures on the ground.

Many residents  believed that they were going to see a Japanese invasion force lying offshore when daylight broke. Although explanations for what had spooked military gunners ranged from a false alarm to  UFOs, an investigation could not clearly determine the exact cause. The incident turned out to be the only serious military action to occur over a continental U.S. metropolitan area during World War II.

To this date, this event which is now known as the Battle of Los Angeles has theories ranging from false alarms that led to chaos to an alien invasion. 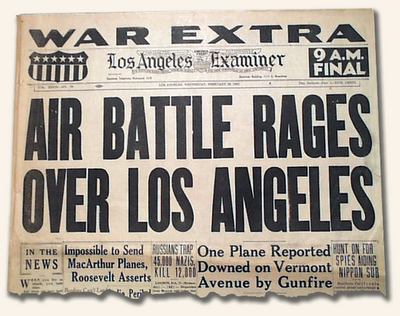 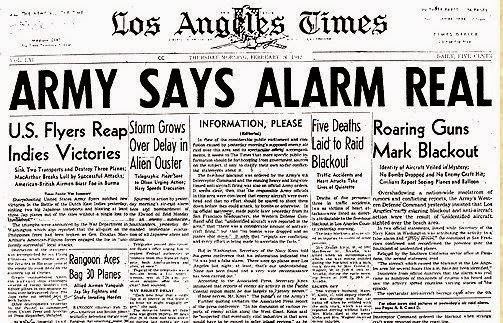