In late 1967 East Los Angeles housed a school system entrenched in racism. The Mexican American community had the highest high school dropout rate and lowest college attendance among any ethnic group.  1 out of 4 students successfully graduated from high schools, and Mexican Americans were "pushed out" of public education. The poor facilities and constant underestimation of student capabilities by teachers created an atmosphere hostile to learning.  Many students believed in better education and demanded bilingual bi-cultural education; more Latino teachers and administrators; smaller class sizes and  better facilities.
During the Spring of 1968, organizers decided to call for action by walking out of classrooms and protesting for equal educational rights.  Many schools were aware of the situation and had police stationed outside of East LA campuses  just in case students decided to walk out. On many occasions in March, students were beaten up and arrested for trying to walk out of their  classrooms. Despite police and administrative efforts to control walkouts, students gathered and walkout of schools to protest these injustices. 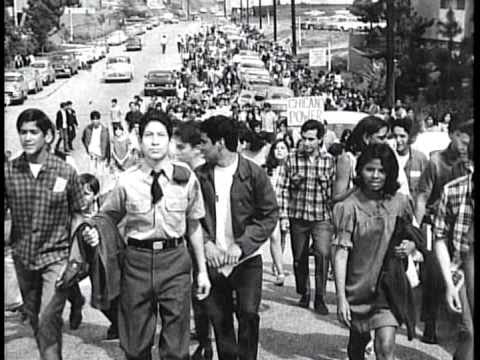 On March 31, thirteen of the walkout organizers were arrested for conspiracy to disturb schools and the peace (which was considered a felony charge). Included in those 13 was a teacher Sal Castro, this created a community uproar which led to even more protest and gatherings in City Hall. All these events were known as the Chicano Blackouts.

Check out this full PBS Documentary: